We all seem to have that one card that eludes our collection no matter how hard we try to obtain it. Here’s my story…

This past May was my first wedding anniversary, the traditional gift is paper. My wife asked if I had an idea of what I would want as a gift. After thinking about it a while, I mentioned to her cardboard is just a thicker type of paper and baseball cards are made out of cardboard, so a baseball card would be great.

She gets me and my collecting. I’m very lucky to have a partner in my life that supports my hobby.

But the question now was what card? I wanted something very unique and special to celebrate our first year together. As you may know, I’m a huge Geroge Brett collector and have been since I started collecting in 1987. I have a few of his 1975 Topps cards in my collection but not a graded one. I decided that I wanted a PSA graded ’75 Topps Brett as my gift.

After spending some time looking over all of the available ’75 Topps Bretts on eBay, there was a significant jump from a PSA 7 ($100) to 8 ($250) and we both agreed not to blow the budget on gifts for each other. So it was decided that I would get a PSA 7 ’75 Topps Brett.

When it came in the mail I was so excited to add it to my collection, it was so beautiful and really a dream card of mine as a child. I didn’t own my first raw one until 2012 when I was 33 years old.

After adding that card to my collection, I concluded I needed to collect all of his Topps cards graded by PSA. I would pick up the 1970s cards graded a 7 and 1980s and 1990s graded a 9, all would be well within my budget.

Then in December, I found a great deal for a PSA 9 1981 Topps #700, George Brett. I was able to buy it for $15 shipped. I received within 3 days from the seller, which was pretty awesome.  I opened it and it was a 1981 Topps #700 graded card but it wasn’t the PSA version I ordered, it wasn’t BGS or even SGC. It was a company I never heard of called GMA. I contacted the seller for a return and shipped that card back to him.

Once I received my refund, I went to rebuy the card again. Before when I picked it up for $15 it was about $8-9 less than all of the others on the market, hence why I made the budget conscious decision to buy that one. I was able to find one about 10 days later for $17.50 shipped and snagged it quickly. Within 24 hours I received a notification that it had been shipped and it was on its way to me.

15 days later it was still at the USPS sorting center, so I contacted the seller and he was going to research what the heck was going on. He told me that they probably lost the card and I would receive a refund. I was patient because I wanted this card and it was a good price.

A week later nothing. Nothing at all. It had 22 since I made the purchased and I just asked for my refund and that was that. At this point, I have been trying to get this same card for almost two months. It was comical that I kept having issues with this one card.

On Friday I found the best deal there was for $22.75 shipped and bought it. And what do you know last night it was in my mailbox. Finally, it was here: 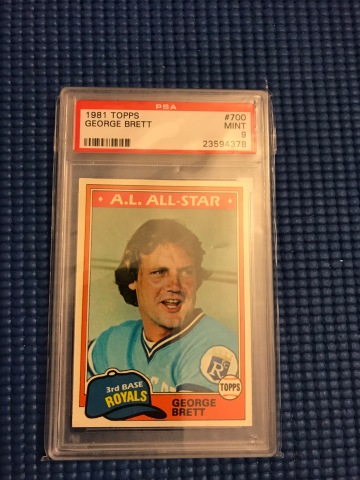 I know its not that crazy what happened but normally when we make online purchases they show up on time, we rip them out, tweet a quick photo and move on. I just had to share this story with you all.

View all posts by bigshep79

A baseball publication that resigns to the awkwardness of life and the 8-1 putout...Stay in Oakland! (cococrispafro@gmail.com)

The BEST Season of the Year

Website of an Oakland Athletics collector and occasional Card Sales

My thoughts on sports trading cards

Cards From The Attic

Vintage Twins
Voice of the Collector

Inside one fan's collection of Nick Swisher stuff

Just an average dude with a blog